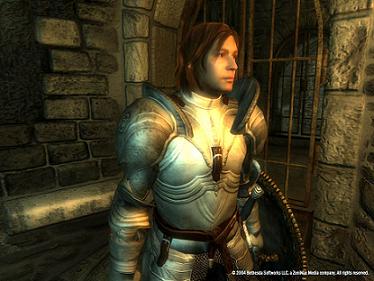 I may have been a little premature in my bountiful praise for Oblivion. As highlighted by Ctrl-Alt-Del, the AI for your allies is pretty wonky.

Scenario 1: I’m leading a couple of characters to my next quest location. We’re all on horseback, it’s great. Off in the distance I spy a wolf. Being an assassin, my first response is to dismount and sneak within shooting distance. Martin, though, his first response is to dismount and charge the wolf. Now, Martin is much stronger than me, no doubt designed to help less experienced players. So, I can risk shooting Martin in the back, or just let him kill the damned wolf. Still, I’m trying to gain XP, right? How am I supposed to do that if the computer kills everything for me?

Scenario 2: Same quest, leading characters to the next quest location via horse. Hearing the gentle clip-clop of my allies, I’m virtually certain their behind me. After a minute or two I spy an imp. I dismount and kill him. Notice anything strange? That’s right, no AI buddies tried to kill the imp first. So, I turn around and, sure enough, my companions are nowhere to be seen. I backtrack to a wooden bridge. One of my buddies is lodged within the bridge, his horse frozen in a freakish merry-go-round pose. The other guy is gone completely. It was about that time I decided to insta-travel, and I think I might just do that more often if I have to play escort.

Scenario 3: This is the one that really kills me. Seriously, it actually killed my character. Martin and I have just killed off a roguish bandit. Job well done, we walk back to our horses. Now, by mistake, I mount Martin’s horse. Naturally this pisses him off. Instead of asking me–his friend mind you–to get off his horse, he decides to effing smite me. Realizing my mistake, I get off his horse pronto. Does that appease Martin, my plot-centric character/friend? Nope, he just carries on slaying me. I don’t even fight back. I tried to talk to him. No go. So, he just kills me. And now I begin to remember the old paranoia of having to save constantly or be ruined by a fucking glitch.

I’m still going to keep playing it though. HardOCP has posted a link to a spiffy site that has lots of browser-based versions of popular PC games including Warcraft, Diablo, Doom, Half-Life, and more. Pretty nifty if you’re looking to, ahem, kill some time.

-via Evil Avatar. Image from Wikipedia Daily Game has some new shots of Dino Master for the DS. I’ve never actually heard of the game, but it sounds interesting. Players dig up fossils and re-assemble them to create dinosaurs. So, what do you do with live dinosaurs? Have them battle to the death of course! Sounds fun.

Game Brink has a posted a review of the Japanese version of Contact for the DS. This looks to be a good game. Little detail is discussed of the much vaunted online component but the review is very positive. Basically it’s a quirky Japanese RPG with a good story, good music, and lots of style. The review does state that combat is a little stale. The review also notes that people who want to enjoy the story should wait for the US release. My Japanese is somewhat lacking, so I guess I’m stuck waiting.

Game Politics has referenced an interesting piece about a Virginia bill that would require three by three inch boxes for video game ratings information. The image avove is taken from the article, comparing the current differences between how ratings are displayed on games and on DVD movies. The game on the left is San Andreas. On the right is Shaun of the Dead. Interesting difference, no? The Virginia bill would require that the space reserved for ratings be even larger. As far as I know, no language in the bill asks to make movie ratings more prevalent.

Image taken from the original article, which you can find here.

In anticipation of Silent Hill, I picked up Condemned: Criminal Origins this weekend. If any of you spent time in arcades during the early 90’s, you’ll remember the image above. I guess the denizens of Condemned preferred mini-golf to arcades, because they certainly didn’t adhere to Mr. Sessions’ message. In short, the enemies are fucked up. What’s worse–or better depending on how you feel about horror games–is that the enemies are all human. You wouldn’t know it just to look at them. Wait until you see the first “crawler”, and you’ll know what I mean.

The game is seriously brutal, too. There is a morbid satisfaction in tasering some doped up schmuck and beating him with a lead pipe Clue-style. It’s practically feral. And when I say doped up, I mean crazy, crazy people trying to smash your head in and find the delicious candy inside. Some of them look like evolution has granted them pale skin and sonar, like cave fish.

Anywho, I thought I’d do a feature proper on the game this weekend and then cap it off next weekend with my impressions of Silent Hill. It’s a two week Creep Fest. Ooh boy. I’m currently in the process of moving articles off the old site and onto the new one. The first article I moved is the Oblivion feature you see below. So, don’t be surprised if you see a few old articles popping up on the main page.

My introduction to the Elder Scrolls started with Morrowind on the Xbox. Morrowind played host to a staggering game world. Players could actually get lost. Multiple quests and myriad character customization options only made the game more daunting. In a way, that was my only gripe with Morrowind: it was too big. Still, I put lots and lots of hours into it. The game–constantly streaming data from the disc–basically ruined the DVD drive on my old Xbox, and I don’t regret it.

END_OF_DOCUMENT_TOKEN_TO_BE_REPLACED Joystiq has posted the first news and scans of an FPS–named Red Steel–for the Revolution. It looks pretty damned cool. They come from the latest (unreleased) Game Informer. They were originally posted on Endangered Gamer. As such, his site has been flooded by fanboys Nintendo afficianados looking for forum fodder. I’d be happy to take some of those fans. Of particular interest is that the main character has a sword (!). Holy crap. Could it possibly be as good as I hope? The Revolution is pretty far off right now. As they say, the proof is in the pudding, and I have no pudding.

Check out the links above for hi-res scans.

I’m realizing that the forums are nearly illegible, so I’m going to see if I can’t fix it. If the forums go down, you’ll know why.